Published through Christian publisher Tate Publishing, “It’s All About You,” narrates how Willette’s baptism wasn’t the answer to all her problems. 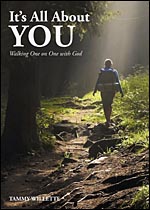 Before her conversion, she was divorced with two children. She had been in a relationship that was leading to marriage, but the relationship was falling apart.

A friend had talked Willette into going to church. Though Willette was reluctant in the beginning, seven and a half years later she has not missed a Sunday.

Her baptism wasn’t the end of her journey, according to Willette. She had to experience breaking through the stopping point she feels many Christians get stuck. Being a Christian is more than accepting the Lord as the Savior, said Willette, but building an actual relationship.

“I want to help people realize that God is not a genie in a bottle,” she explained, “It’s about a relationship and getting to know Christ through reading the Bible.”

Willette also compared Christians who are stuck at the basics as being fed baby food.

Having a relationship with Christ does not mean there will be no problems, said Willete, but that God is there to help a person trudge through his or her hardships.

The book took around three years for Willette to write.

She began writing and journaling her experiences after people expressed interested in her story.

Tammy's book was published by Tate Publishing and may be purchased on the Tate Publishing website or at Amazon at, https://www.amazon.com/Its-All-About-Tammy-Willette/dp/1620244608